The Rendering Equation as a Convolution

Calculation of ambient light on a surface requires to calculate the integral of the incoming light, with respect to the whole atmosphere, for each point on the surface. Calculation of the integral on real time is just not possible, however it is possible to precalculate that integral and store it, somehow, to be able to use that information at runtime. There are several ways to precalculate and store the results of the integral, among them we find irradiance maps and spherical harmonics. The irradiance map is an image that stores the result of the integral for "every possible" direction on the atmosphere. The Spherical Harmonics is a technique that allows to approximate an irradiance map with just a few coefficients in a polynomial, thus serving as a way to compress its information, and even to accelerate its calculation. 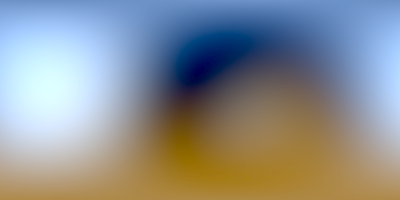 How do you normally calculate an irradiance map?

Irradiance can be calculated by integrating throught the whole atmosphere the light that comes to a certain point (of the surface we are shading), weighting each ray of light by the cosine of the angle between the normal of the surface and the direction of that ray. 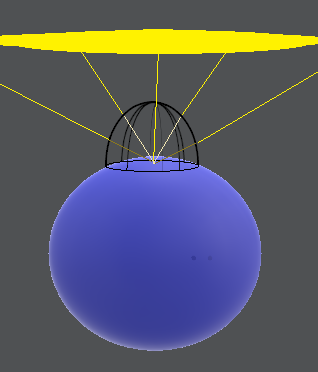 If you take a look at Equation$~\ref{IrradianceEq}$, you can find something familiar. Yes, it looks like a convolution. A convolution of the function of the energy, coming to the point that you are shading, with a kernel that represents the cosine of the angle.

As with any convolution, calculating it by brute-force is really expensive, but calculations in the frequency domain will accelerate it.

As always, Fourier transform is the favorite option for image processing guys when working in frequencies, but we can notice that because of the nature of the phenomena we try to approximate, working in spherical coordinates is a better fit... Aha! Spherical Harmonics to the rescue. By transforming our functions to the frequency domain and working in this domain we can achieve even realtime rates.

Are few frequencies enough for a good approximation?

Here is where the magic happens. The frequency representation of the cosine of the angle that multiplies the incoming energy requires only a few frequencies to be represented, as the higher frequencies of its representation are zero or very small numbers. You could use as few as 4 coefficients to get some nice light or 9 coefficients to make it richer in detail. We can see that this is the case on the pixels of the irradiance map, which change slowly in intensity and color.

The Rendering Equation as a Convolution

If we interpret this convolution, for any point in the surface of an object, the incoming light is the sum (integral) of any ray of incoming light weighted by the cosine of its angle with the normal. This is a simple convolution.

Spherical Harmonics (SH) allow to transform any signal to the frequency domain in Spherical Coordinates, as Fourier does in cartesian coordiantes.

In signal processing, it is well known that a convolution in the time domain is equal to a multiplication in the frequency domain (that is why convolutions become so cheap in this domain). This is always used to accelerate operations in image processing.

In order to use this property to accelerate the calculations of the rendering equation, we will need the transformation of $L_i(w)$ and $\overline{(N \cdot w)}$ to the frequency domain, after that we will multiplying the resultant coefficients and transform those coefficients back to the spatial/temporal domain (For spherical harmonics, the convolution in frequencies is not a simple multiplication as it is in Fourier, but the formula is still very simple, we will see later.)

Transforming a Signal to the Frequency domain using Spherical Harmonics.

The only thing we don't know from that equation is the SH Basis $Y_l^m$. It turns out there is a formula for those,

You can get more information from [0].

You will notice that each Basis belongs to something called Band, and that each Band has certain number of Basis in increasing order. I personally see each band as an indicative of the frequency I am working with and each Basis in the Band as the Axis I am projecting my function onto. For example, Band zero is the frequency zero $Cos (0*2*\pi*t)$, this frequency is constant and it turns out to be the average of the whole function $f(w)$ multiplied by a normalization factor that comes from the Basis.

Once you calculate your coefficients $F_l^m$, you can get back to the original function by applying the inverse transformation (Equation$~\ref{inversetransformation}$).

As with any other transformation to the frequency domain, the more frequencies we use, the better the approximation is to the original function. That being said, let me add that in computer graphics we cheat all the time, so we don't use a very good approximation, we actually use very few frequencies so that the processing time and memory consumption is low. So, don't be surprised when you see this.

As we said previously, the convolution in frequencies is a multiplication. The equation for Spherical harmonics convolution when the kernel has axial symetry is:

where $h$ is the kernel, and $f$ is the function to apply the kernel on.

You can see the derivation in [1]:

In short, the convolution we see in the rendering equation can be performed in the following way:

The coefficients for the cosine kernel never change. Therefore, we can calculate them once and use them everywhere. In the following table, I provide those coeffients which include also the multiplication by the squared root in Equation$~\ref{convolutionEquation}$; this means that we just need to multiply them with the coefficients of the SH light and apply the inverse transform to get the result of the lighting equation.

for l>1, odd bands get zero in the coefficient, and even bands can be calculated with the Equation$~\ref{evenElements}$ as reported by [2].

Evaluation of ambient light from the spherical harmonics coefficients (calculated using the code before) in a pixel shader.

Displaying an irradiance map from SH coefficients. The default values for the coefficients are used to lit the previous scene.